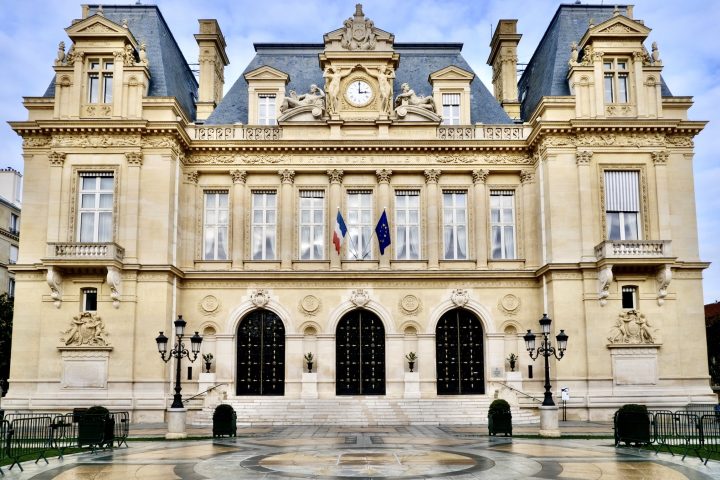 I spent last weekend in Neuilly-sur-Seine (with a bonus visit to La Défense), which is essentially like saying I spent the weekend in a suburb as close to Paris as you can possibly get. For most Parisiens, French people, and even tourists, I’m sure this isn’t at all exciting. I however fell in love with Neuilly-sur-Seine.

There a lot of towns in France that contain “Neuilly” somewhere in their name (25 to be exact). Neuilly-sur-Seine is the one known simply as Neuilly, therefore that’s how I’ll refer to it. Neuilly is directly west of Paris in-between Porte Maillot and La Défense. It’s on the Métro Line 1 so it’s very easy to get to.

We went to watch Romain’s dog Dalton for the weekend. Since Romain grew up in Neuilly I’ve been to his mom’s apartment a lot, but I’ve never spent any time exploring and walking around.

People say that Paris is really a lot of small villages, which I agree with. Neuilly is truly like its own village just outside of Paris. It has everything you need, is literally right outside of Paris, and is so calm and charming.

On Friday morning I went to Le Marly. Romain described it as a place where “everyone” in Neuilly goes. I just had a coffee and worked, but there was a big lunch crowd and the food smelled delicious. My double espresso at Le Marly cost 5€, which was my first taste of Neuilly pricing. I guess I shouldn’t be shocked – Neuilly is the wealthiest and most expensive suburb of Paris.

Afterwards I went to Jour, a salad bar for lunch. Here I received confirmation that Neuilly prices are in fact more expensive than Paris – my salad cost a shocking 17€.

In the late afternoon we walked Dalton in the Bois de Boulogne. Although the Bois de Boulogne is technically Paris (it was annexed in 1929 and added to the 16th arrondissement), it’s one of my favorite features of Neuilly. It’s the second-largest park in Paris and yet doesn’t feel like being in Paris at all. It’s so refreshing to be surrounded by so much green and nature. The trees are massive and there are lots of different walking paths and trails.

For dinner we went to Le Chalet, which I’ve only heard about from Romain for the past two years. Although I wanted to try just about everything on the menu, I followed Romain’s lead and ordered the fondue savoyarde which did not disappoint. It was a fun yet intimate spot and perfect for a chilly Friday night.

On Saturday we went to Durand Dupont Drugstore, another Neuilly institution for morning coffee. I loved the light and bright decor – it had a very Normandy-esque vibe with light woods, blues, and photos and posters of the sea. Sticker shock hit once again when I saw that the double espresso cost 7€!

Romain took me to see l’Église Saint-Pierre and the Mairie de Neuilly-sur-Seine, the town hall. Both were impressive, stunning structures. Neuilly really does feel like a scaled down version of Paris with wider sidewalks and less traffic.

We walked around the Jardin d’Acclimatation in the afternoon which is a wonderland for kids. There are tons of rides, animals, and activities geared specifically at children. Romain told me about how he came almost every day after school growing up. I could definitely see why. The Jardin d’Acclimatation is right next to Fondation Louis Vuitton. We walked around to the reflection pool and caught a pretty glimpse of the late January setting sun.

We didn’t have any dinner plans. There aren’t nearly as many cafés or casual restaurants in Neuilly, so we ended up going back to Le Marly. The food was pretty average and I don’t think homemade. The atmosphere was nice and lively, especially on the terrasse, but next time we’d probably pick another spot.

On the way home we passed Marché des Sablons, and though we didn’t stop (Dalton understandably gets very distracted at markets), I loved seeing the entire market draped in mimosa flowers. I’m not sure if it’s just a Neuilly “thing,” but it was a very festive touch!

I went to Le Séquoia for a café au bar, one of my favorite things to do on a Sunday morning. It feels like such a “French” experience and is just a nice, quiet moment. Plus it’s not as expensive as taking a table.

We went to La Défense, Paris’ main business district for lunch. I’d never been to La Défense and was shocked at how large La Grande Arche actually is…it’s seriously massive. La Défense is very modern and is probably the thing that most closely resembles the US in France for me. It’s very modern and almost like a big mall or shopping center with tons of offices and skyscrapers too. I don’t think I’ll go to La Défense regularly, but it’s also on the Line 1 Métro and could be a good option if I’m feeling homesick?

Overall I had a great experience in Neuilly. I wasn’t expecting it to be more expensive than Paris (I didn’t actually know it was possible), but I guess you pay a premium to live in such a beautiful place that’s connected to Paris yet simultaneously worlds away.