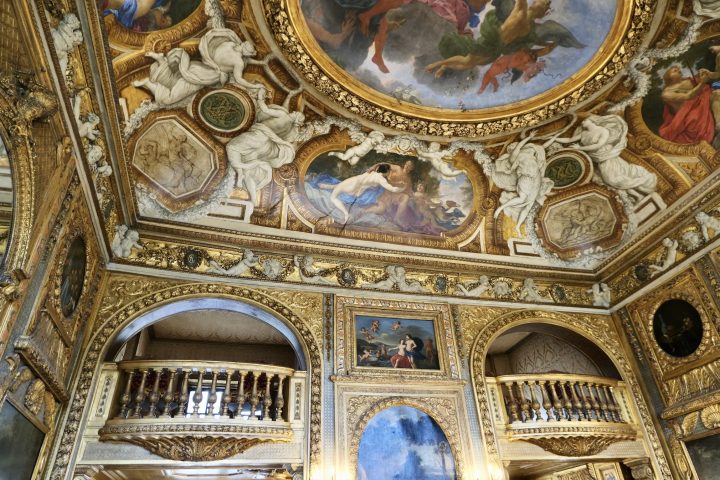 Hôtel de Lauzun is one of those mythical places you hear about in Paris – stunning, filled to the brim with history including former residents like Baudelaire, and almost impossible to get into and see. From the outside it looks like just about any other hôtel particulier on Île Saint-Louis, except for the wonderfully ornate dolphin-shaped gutters. But even then, there really isn’t an indication of how spectacular it is inside.

When the opportunity to visit Hôtel de Lauzun arose, I absolutely couldn’t turn it down. I visited in French. A French visit normally isn’t a problem for my comprehension, but because of how stunning it is I was in and out of paying attention. The interiors of Hôtel de Lauzun are so ornate and so intricate (it reminds me a bit of Palais Garnier) that my eyes wandered across every inch of every surface to take it all in. French went on the back burner.

It says above the entrance that Hôtel de Lauzun was constructed in 1657. Historians believe that it wasn’t officially finished before 1660. It’s one of the only buildings in Paris to retain its gilded, mirrored, and painted interiors – typical of the Louis XIV period. It’s a wonderful example of the grand French classicism style.

The hôtel particulier (private mansion) isn’t laid out in a normal fashion. Architect Charles Chamois chose to put the main building in the front because of the proximity to the Seine and the views. In addition, he raised the ground floor to protect the building from flooding.

The Salle des Gardes is the biggest salon in the Hôtel de Lauzun. It features some of the most incredible painted beams I’ve ever seen. The floors are Parquet Versailles and run throughout the hôtel particulier.

At one point, the Salle des Gardes was a library. It became too dark and the bookcases were removed. You can see a photo of the former space here. The guide also mentioned that at one time the room was split into smaller salons when the scale went out of style.

From the Salle des Gardes we moved into the adjacent room – the Bibliotheque. Beautifully ornate painted panels cover the room from floor to ceiling. Some of the panels contain secret doors that connect with staircases for entering and exiting without being seen.

On the second floor, we entered into a room formerly occupied by French poet Théophile Gautier. Our guide told us that the room is decorated to look like the 17th century space.

As it turns out, when families sold the hôtel particulier, they took their objects and art with them. Baron Pichon, the owner of Hôtel de Lauzun in the 19th century, moved objects from room to room and purchased new objects to make the spaces look original. Only the ceiling frescoes are original to each room.

One of the giveaways is the two cherubs that flank the mirror above the fireplace. In the 17th century, symmetry was of utmost importance. The cherubs are neither symmetrical nor do their feet sit flush along the base.

Next, we went into the fabulously ornate Music Room. I was again taken aback by the opulence of the space. I find the music room to be the most stunning room in the entire Hôtel de Lauzun.

Baudelaire lived at the Hôtel de Lauzun for a period of time, and while he was there he was a member of the Club des Hashischins. The group held monthly meetings just under the mezzanine in the music room and experimented with drugs. Members of the club included Alexandre Dumas, Victor Hugo, Charles Baudelaire, and Théophile Gautier.

On the tour we viewed examples of the effects of the recent 20th century restoration on the Hôtel de Lauzun.

First, there’s an improperly cleaned fresco and which turned blue as a result. The mistake remains as an example of errors that happen during the restoration process.

Next, from behind the door we saw a dark spot on the wall. Before restoration, the walls were all a similar shade of black. I can only imagine the care and time it took to bring the Hôtel de Lauzun back to it’s golden, gilded glory.

If you have the opportunity to visit Hôtel de Lauzun, don’t pass it up. Next time I’ll hopefully visit with a guide in English so I can catch even more of the rich, splendid history.

As always, for help with Paris Travel Planning, feel free to send me a message here!