Not surprisingly, the options for store-bought tortillas in France are dismal. I buy them anyways out of convenience. However, now we’re in Normandy in confinement. As a result, we’re limiting our outings to the grocery store we decided to get resourceful and make our own tortillas. This homemade butter tortilla recipe is a blend of a lot of different recipes and modified based on what we had on home. I think it’s pretty simple and foolproof, and nothing beats homemade butter tortillas!

So it’s Sunday night. I ask Romain what’s for dinner, and he says soup and salad. I don’t complain about food and I’ll eat anything, especially when I’m a guest in someone else’s house. But for me, Sunday night is for Mexican food…not soup and salad. Luckily, I brought a ton of shredded cheese from Paris so I suggested we make quesadillas.

I started searching homemade tortilla recipes online and on Instagram and there were a few common denominators:

Seemed easy enough. Since we’re Normandy, butter was our fat of choice. I also chose butter to try to recreate Central Market’s Butter Tortillas. However, we didn’t have baking powder so we left it out.

I bought a food scale and it’s seriously been a game changer. Honestly, it makes cooking so easy. In short, we measured out the weight of everything in a bowl directly on the scale, mixed it together, let it rest, and fried the tortillas.

If you can find someone to help you for the rolling and frying process it makes the recipe even easier. I recommend being on frying duty.

What To Make with Your Homemade Butter Tortillas

You could use these tortillas for a lot of different things. For example, you could make tacos or quesadillas. Additionally, you could dip the tortillas in queso or fry them to make chips. I’ve even heard of people making pizzas with tortillas. Of course, being French, Romain put Nutella on one for dessert. To clarify, that’s a hard pass for me.

We made quesadillas so we just browned some ground beef and onion seasoned with salt and pepper, paprika, a touch of cayenne, chili powder, and cumin. We used a mixture of shredded mozzarella and cheddar cheese because that’s what I found in France.

Next time, we’ll probably make the butter tortillas earlier in the day and then do our quesadilla assembly to cut back on the time, but you better believe I’m instating Sunday Mexican food nights in Normandy!

In conclusion, this tortilla recipe is so easy and will definitely become a staple. 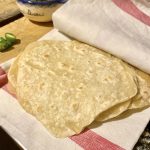 So, if you end up making these butter tortillas, let me know what you think!

This post includes an affiliate link. I make a small commission from items purchased through my links. Merci!